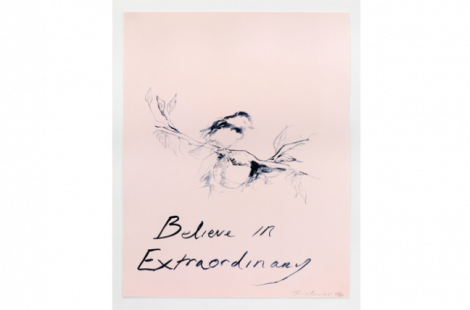 “Over the last four years we’ve raised the standing of the Collection both by getting Accreditation from the Arts Council, but also through the acquisition of works by well-known artists, many of whom are Royal Academicians”. The new acquisitions include Perpetual Spring, donated by Eileen Cooper RA the first woman officer of the Royal Academy when she was elected to be Keeper in 2010. This is the second of her works in the Collection and hangs in the Dome, the college’s dining hall, which houses several other new acquisitions including the latest one And all the Fairies in the Land Cried to Dream Again by  Fiona Rae RA, one of the Young British Artists of the 1990’s, known for her work with abstract forms, bright colours, and psychedelic designs. Rae says of this work, “I was inspired by the way a gestural abstract mark can suggest both imagery and feeling simultaneously, whilst remaining an abstract moment on the canvas.

Three other new works also hang in the Dome: in Glide II by Mali Morris RA, colour relationships create complex layers of space. Her work follows in the strong tradition of British female abstractionists, hanging next to Expanding Forms by Wilhelmina Barns-Graham CBE, a prominent member of the St Ives School and the Collection’s second work Walk In by Vanessa Jackson RA.

Another new work, hanging in Upper Fountain Court is Cindy Sherman’s Untitled 103, from her famous ‘film stills’ series which feature self-portraits in stereotypical female roles inspired by the 50s and 60s Hollywood film noir. She writes of this work, “My stills were about the darkness of role – as well as contempt for the domineering ‘male’ audience who would mistakenly read the images as sexy.”

A new venture for the College has been to establish a Collecting Collective which invited donors to contribute small (or large) amounts until a threshold was reached which would allow a new work to be purchased. The curator then drew up a shortlist of artists and the donors voted on the one they’d like the College to acquire. They voted for Anni Albers who’s just had a highly praised solo retrospective at Tate Modern, and her zinc embossed print TRIII hangs in the Walkway.

Martin considers it important in selecting works for the Collection that they should engage the students.  Cambridge terms are a short eight weeks, so students are very immersed in their studies - “We need works that draw the students in”.  Current favourites are the neon by Fiona Banner RA which hangs in the JCR Bar called Beagle Punctuation but generally referred to as Snoopy.  Two Tracy Emin prints of birds also have great appeal, one with text that reads You inspire me with your determination and I love you and the second that reads Believe in Extraordinary - messages with special meaning for students which Martin feels summarise well the ethos of Murray Edwards, a College for women which believes everything is possible.

Professor Martin Roland trained as a medic at the University of Oxford, has practiced as a GP and has held professorial posts in Manchester University and at Cambridge where he founded the Cambridge Centre for Health Services Research. He became a Fellow of Murray Edwards College in 2014, where, among other posts, he was elected Chair of the Art Committee.

This was a lucky chance for the New Hall Art Collection. Martin’s uncle, Henry Roland had founded the well known gallery Roland Browse and Delbanco in Cork Street off Piccadilly in the 1940s. Martin remembers that there were always discussion of art in the family, with regular visits to the gallery and paintings as gifts for special occasions. Before entering Oxford, he travelled to Venice for a six-week course on Venetian art, with lectures in the morning and the opportunity in the afternoon to search for and study the pictures discussed. Shortly after Martin started chairing the art committee, it became possible to appoint a curator which he says has made a huge difference to how the Collection has been able to develop, both through higher quality acquisitions, more professional exhibitions, donations which have enabled the curator’s post to be extended and, most recently, Arts Council accreditation which has the potential to open up new sources of funding for the Collection.

With over 550 works the Collection is Europe’s largest collection of art by women artists and with Harriet Loffler, Curator, an active art committee, increasing interest from donors and the support of dedicated College staff, Martin is looking forward continued development of the prestige and impact of the Collection. If you can’t take a tour round the Collection itself, it has an excellent website which you can browse at www.art.newhall.cam.ac.uk/

What the New Hall Art Collection means to me Categories

A Treasure Trove of Female Creativity