What the New Hall Art Collection Means to Me: Sara Holdsworth, Art Advisory Board 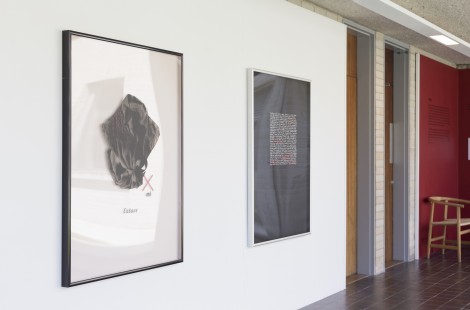 Sara Holdsworth is a freelance museum and gallery consultant, who was previously Head of Programmes at Manchester Art Gallery.  She sits on the New Hall Art Collection Advisory Board and was instrumental in getting the Collection Arts Council museum accreditation in March 2018.   She is also the daughter of the College's second President, Dr Valerie Pearl.

When my mother Valerie Pearl arrived as President of New Hall in 1981, art was not a feature of the college.  There were a few contemporary works (all by men) in the Dome but most memorable was the 17thc Dutch landscape on loan from the Fitzwilliam. Hung in pride of place in the Fellows’ Drawing Room, it showed a herd of cows grazing in a field.  She was never sure whether it was chosen by the museum unintentionally or as a sly reference to the place where women dons congregated to drink their coffee.

It is hard to imagine now, but back in the 1980s the design of the college was deeply out of fashion.  The country house style of the Thatcher years was in the ascendant and mock medieval tapestries of the Virgin-in- the- garden type covered the brick walls.  In this setting the art made by women that flowed in from the early 1990s created quite a stir.

My first intimation that the college was considering contemporary art was a phone call in 1985 from my mother asking me (then a young curator at Manchester City Art Gallery) if I had heard of an artist called Mary Kelly. I like to think that my enthusiasm played a part in her decision to host (with Kettle’s Yard) Kelly’s year-long residency.  She was an inspired choice.  Her work, with its ephemeral materials, clothing and texts, provoked many Fellows to re-assess their views about art. Its subject matter was challenging. It dealt with female experience such as child raising in a way that was intimate and personal but it was also deeply academic in its range of reference from Charcot to feminist psychoanalytic theory. At first many Fellows were bemused, but Kelly’s willingness to discuss her work, her intellectual seriousness and her interest in other peoples’ research soon dispelled their alarm. Her distinctive way of looking at things and quietly humorous manner made a deep impression.  She also benefitted. Talking to me years later on a trip from the US she remembered her time at the college as a remarkable one-off experience.

There followed a huge response by women who wanted to donate their work.  In what Deanna Petherbridge called ‘a determined act of faith and idealism’, the art flowed in to form the nucleus of the collection.  The artists ‘waived aspects of economic gain by independently gifting their works as part of an entirely novel, communal and untested enterprise’.  Extraordinary things came in that first wave, including pieces by Rose Garrard, Eileen Cooper, Zarina Bhimji, Maggi Hambling, Maud Sulter, Judith Cowan and Lubaina Himid. The works span a huge range from the overtly feminist to painterly and non-political abstraction.

In the last few years I have watched the collection taking another giant leap, due in great part to the enthusiasm and tireless support of many staff, particularly Sarah Greaves and Martin Roland. There have been some major gifts and acquisitions, including works by Paula Rego and Tracey Emin. But most significant is the way that Murray Edwards regards the art on its walls as an integral part of college life, a creative expression of its core values.  When you go into college now the collection has an unmissable presence: there always seems to be a new piece to look at, or a display or event.  The Guerrilla Girls have performed to a packed auditorium and academic seminars have explored themes which particular pieces raise. There is now a professional curator, interpretative panels and labels are produced to museum standards, and recently the collection has gained Arts Council accreditation.

The idea of an all-women collection is absolutely of the moment. It has resonance with the current generation and with fourth-wave feminism. Tate Britain has plans this year to re-hang its post- 1960 permanent collection entirely with art by women.  At last the rest of the world is beginning to catch up!

What the New Hall Art Collection means to me Categories

What the New Hall Art Collection Means to Me: Ann Jones, Curator at the Arts Council Collection