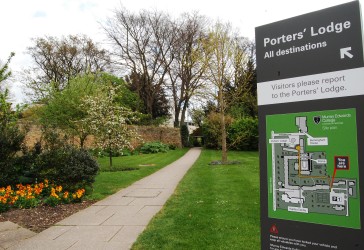 Gardens at the back of College

Murray Edwards College is a chartered corporation. Originally incorporated in 1954 as a company limited by guarantee, in June 1972 the College was granted a Royal Charter in the style "The President and Fellows of New Hall in the University of Cambridge". The Charter set out the College’s objects, the principal of which were and remain:

A Supplemental Charter was granted in June 2011, which changed the name to "The President and Fellows of Murray Edwards College, founded as New Hall, in the University of Cambridge". The new name recognised the founder, Dame Rosemary Murray, the donation of the Edwards Family and the former name, New Hall, with which the College was first incorporated.

The College is governed according to its Statutes, which provide for the constitution and government of the College, including:

The ultimate governing authority in the College is the Governing Body which comprises Official, Supernumerary, Professorial and Research Fellows.

The Council administers the College’s affairs. It makes decisions and promulgates policies that govern the College’s activities. The Statutes grant the Council the power to issue Ordinances, which provide for the good governance of the College and establish procedures, rights and obligations for members. Special Ordinances have also been made by Council which are available on application to the Bursar.

The Council members are the Trustees of the College.  The current Trustees are: