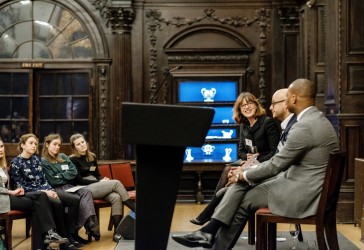 Collaborating with Men is ground-breaking research conducted by Murray Edwards College to establish how men and women can work together to transform workplace culture barriers to women’s progress into leadership positions.

The programme seeks to find new ways for men to work alongside women to challenge and change attitudes and behaviours and create workplace cultures where talented individuals have equal access to opportunities. Delivered through research and workshops with large UK employers, the initiative enables employees across the genders to work together to solve cultural issues in their own workplace. It was launched after a 2014 survey of the all-female College’s alumnae reported workplace culture issues to be a greater barrier to career advancement than challenges relating to balancing work and family life.

In September 2019, we launched two new reports as part of the Collaborating with Men programme of research:

Both reports suggest practical ways in which men can collaborate with women to facilitate a more gender inclusive workplace culture, counter the impact of unintentional gender bias and promote equality of opportunity.

The Inclusive Networking and Sponsorship report shows that despite widespread mentoring initiatives, women perceive they have less access than their male colleagues to informal networks and career sponsorship. The report includes suggestions and actions on how to make informal networks more inclusive, and presents case studies on how to run effective sponsorship programmes.

The Everyday Workplace Inclusion report presents evidence about the impact of unintentional gender bias on career progress. The report suggests how to involve men in working with women on gender issues and provides practical suggestions on what can be done to create a more inclusive working environment. Examples include how to give more gender-neutral feedback, how to intervene when people are interrupted or not credited for their contributions in meetings, how to call out gender bias and what to do when you are called out.

In February 2019, we launched the key findings from our latest year-long gender balanced study, involving 5,814 UK employees (54% men and 47% women).

The research found that almost three in four women (74%) employees believe their workplace culture makes it more challenging for women to advance their careers than men. And two in five (42%) men agree. While many studies have focused on women’s perceptions alone, this research also reveals men’s views and the gulf between the two, identifying where focus is needed to ensure equality of opportunity.

The findings shed new light on subtle behaviours derived from the ways in which people think of the strengths and attributes of men and women. These include stereotypical thinking about an employee’s strengths and potential based on their gender and women and men being held to different standards of behaviour. The study found this unconscious, but nevertheless damaging, bias is perpetuated by both men and women, mainly to the detriment of women’s careers.

This is not a simple issue. Few men or women are intentionally sexist. Men and women in organisations we have surveyed have been surprised by the gender gulf that this research reveals in perceptions about the impact of unintentionally biased thinking.

An initial summary presenting the key research findings from the year-long study can be found here.

Ahead of publishing our final reports in the Spring the College’s researchers are keen to hear from organisations that have addressed the issues of being interrupted in meetings or not being credited for contributions etc. Please contact Jill if you would be willing to share your practice.

In addition to this summary we are planning to release three research reports in spring 2019. These reports will provide practical support, focusing on a critical review of strategies and actions that work or seem promising in building gender inclusive cultures.

Changing workplace culture to be more inclusive for women

In 2016, 40 men who had early career, middle management and senior leadership roles in SMEs and large organisations, across public and private sectors participated in the initial research. The findings were then built on in a collaborative conference in which men and women worked together on the recommendations which can be found in the research report that can be downloaded here.

The research asked men who support gender equality:  Do they see the problems women report? What they can personally do to help change the workplace? What support do they need from leaders?

We presented the 2016 research to many large organisations in sectors that include finance, technology, engineering, science, professional services, media, academia and government in the UK and beyond. Many asked for more detail on how to implement the solutions suggested in the research. We therefore produced a guide, From research to day-to-day practice, which can be downloaded here, as a companion to the 2016 research to help turn the research into action.

That was not just a reflection of history. 31% of alumnae under 30 cited an unsupportive workplace. The results of our survey corresponded with findings of a number of others which have now been published.

However, while we do want to support women, the issues they describe cannot be solved by women alone. This is not about ‘improving’ women, but about changing workplace culture. That has to be done in collaboration with men.

Through our Gateway Programme, and the way we teach, students develop the confidence to face the challenges they can expect to meet in the workplace. We know though that many women first meet these challenges after several years at work. We run a mentoring scheme for our 25-35 year old alumnae with an alumna mentor at the later stage in her career. We aim to be a resource for our women throughout their lives.