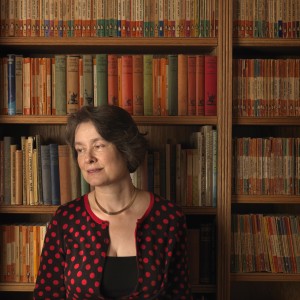 As an alumna of Murray Edwards (New Hall, as it then was), I was struck from the moment I entered the College for my admissions interview (long ago in December 1969) by the distinctive atmosphere created by the bold architectural lines of the buildings and the equally liberative intellectual liveliness of fellows and students.

Please send any hard mail to:

Or email her to solicit instructions

Professor Sarah Coakley read Theology at Cambridge as an undergraduate and then went to Harvard as a Harkness Fellow, where she took a ThM degree.

Returning to Cambridge to start her doctorate on Ernst Troeltsch's christology, she was appointed almost immediately to a junior lectureship at Lancaster University, where she was successively lecturer and senior lecturer. In 1991 she moved to Oriel College, Oxford, where she became that college's first woman fellow. In 1993 she was invited to join the faculty of Harvard Divinity School as a full professor, and became Mallinckrodt Professor of Divinity in 1995.  In 2007 she was appointed to the Norris-Hulse Professorship at Cambridge, and returned to Cambridge in 2008.  From January 2011 to September 2014 Professor Coakley served as deputy chair of the School of Arts and Humanities.

Professor Coakley has worked widely on interdisciplinary projects, most especially with the Harvard evolutionary biologist and mathematician, Martin A. Nowak, with whom she co-edited Evolution, Games and God:  The Principle of Cooperation (Harvard UP, 2013). Out of that collaboration also sprang the materials for her 2012 Gifford Lectures, Sacrifice Regained:  Evolution, Cooperation and GOd (forthcoming with Oxford UP).

From 2014-17 Professor Coakley held a major research fellowship from the Leverhulme Foundation, devoted to her continuing work on her systematic theology, the first volume of which appeared as God, Sexuality and the Self:  An Essay 'On the Trinity' (Cambridge up, 2013).